Finally, publishers can monetize with confidence using in-app ads without being concerned about latency or whether they’re truly generating the highest ad revenue possible.

In-app header bidding, or parallel bidding as we like to call it, is like the brand new hyperloop that major ad tech industry players are all buzzing about. What worked in the past, on the other hand, has now been dismissed as obsolete and completely irrelevant.

That’s understandable as parallel bidding IS revolutionary in the mobile in-app ad space and it IS a much better model for bidding and serving ads than what was available before (the waterfall model). However, like with the hyperloop, until the technology is widely adopted and surpasses critical mass to the point where a hyperloop station is on every corner, one would still need to use an older method, like walking, driving, taking public transportation, biking, scooting, or even waltzing to get to an actual hyperloop.

Until all major ad tech players, especially ad networks, adopt parallel bidding technology, the waterfall model, for the time-being is still an important factor in the equation for publishers. In part one of this article, we explained how our ad mediation solution overcame the inherent obstacles associated with the waterfall model and reinvented it to put publishers’ ad revenue first. In this article, we will dive deeper into how our parallel bidding technology actually works by itself AND in sync with our advanced waterfall solutions to elevate even more ad revenue for publishers today and beyond.

Parallel Bidding: How It Works By Itself

In a nutshell, parallel bidding is a new ad request and auction model where the ad requests get sent out simultaneously to the ad demand partners and the auction of ad bids takes place in real-time—all on the server-side.

Whereas the traditional waterfall model sends out ad requests and evaluates ad bids sequentially—on the client-side. Instead of real-time bids, this model relies mostly on historical performance data for the bids. For publishers, this model carries some persistent setbacks, such as latency, inaccurate bids and suboptimal ad revenue (read more here). 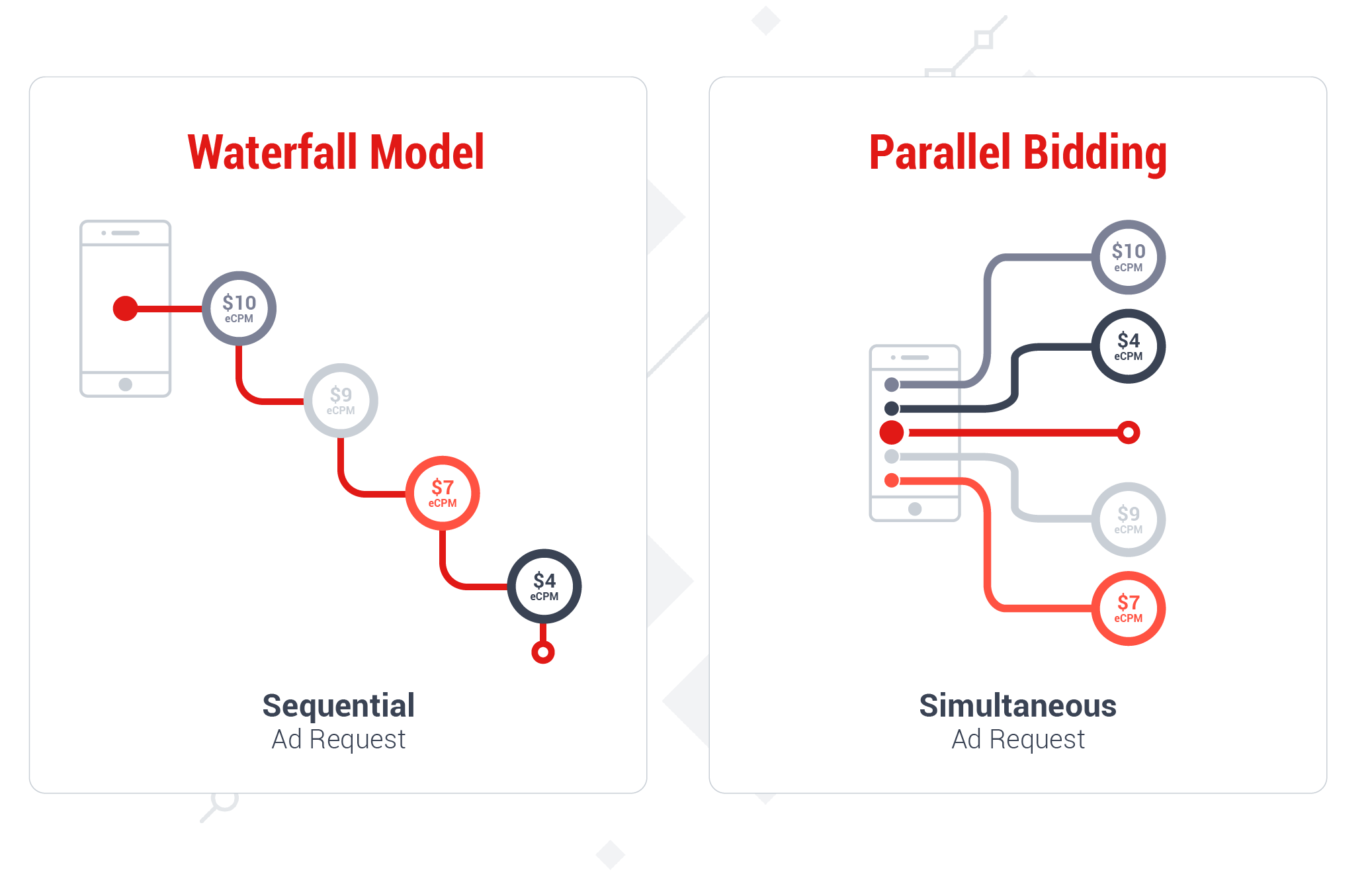 It is within the context of the traditional waterfall model’s setbacks that makes parallel bidding such a ground-breaking technology in the mobile in-app ad space.

Finally, publishers can monetize with confidence using in-app ads without being concerned about latency or whether they’re truly generating the highest ad revenue possible.

So how exactly does Parallel Bidding work on a deeper level?

Real-time bidding in mobile is not a new concept. For years, Demand Side Platforms (DSPs) have been competing for mobile ad impressions programmatically using real-time bidding through ad exchanges already. Ad networks that are not also ad exchanges, on the other hand, were not technically capable of participating in these real-time exchanges. That is until recently with the emergence of parallel bidding.

Now ad networks that have adopted parallel bidding can function like DSPs to programmatically place real-time bids through an ad exchange type of environment. For publishers, that simply means a whole new category of demand partners, ad networks, now being able to compete in real-time for an ad impression. As many premium ad networks tend to generate higher ad revenue per impression, their addition to the RTB arena is expected to elevate ad revenue for publishers (check out the early results of parallel bidding here). 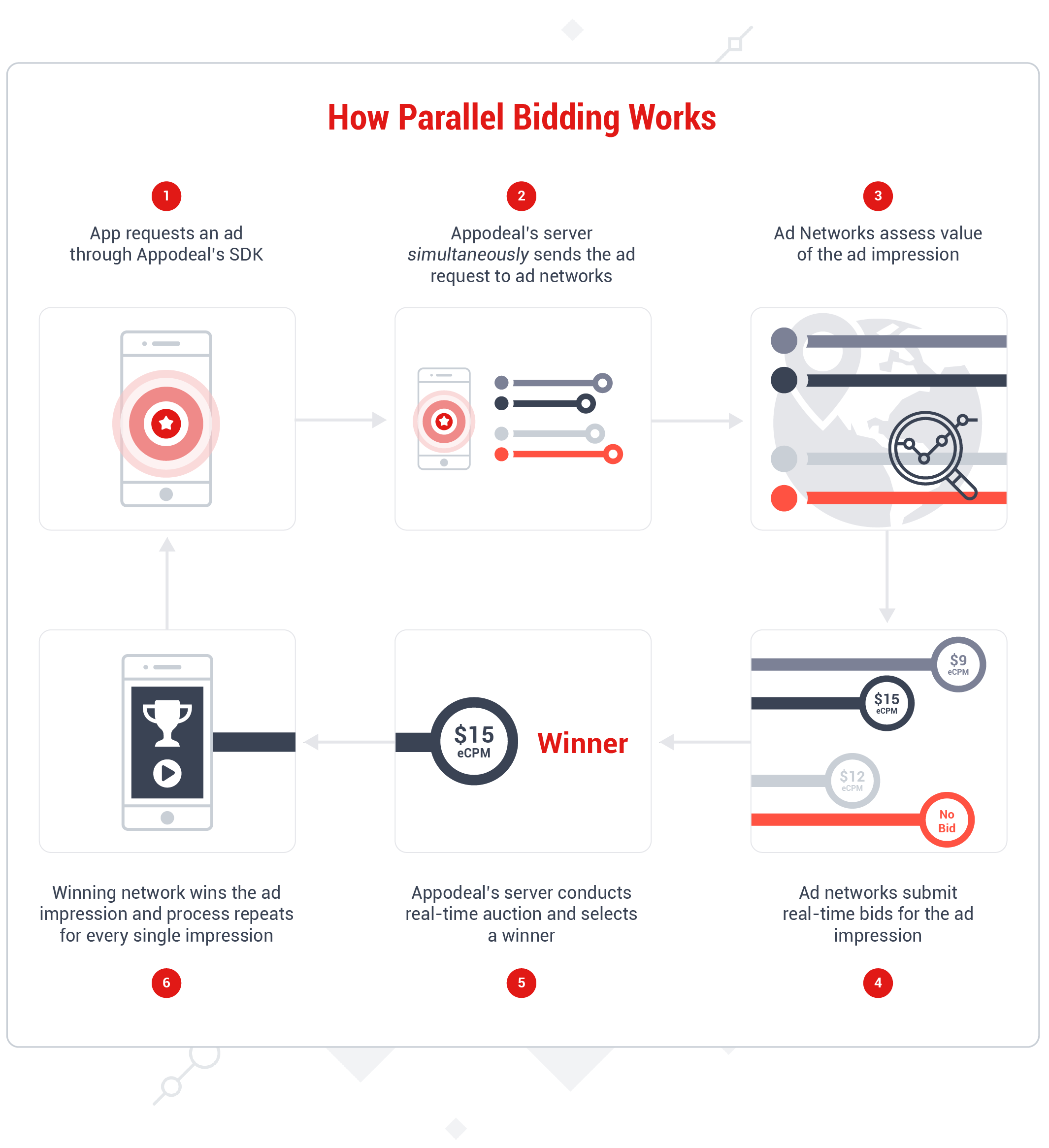 After an app requests an ad, ad networks powered by parallel bidding are now also able to analyze the traffic from an app and its quality to decide how much to bid. For each impression, they can gather relevant data about the end user and the impression itself before placing a bid. Appodeal’s server then conducts an auction of all the bids in a real-time ad exchange and delivers the highest paying ad to its SDK, which then requests the winning ad from the ad network’s SDK to cache and display the ad.

Instead, ad networks can (and prefer to) place soft bids, which are estimated bids and not the actual bids, over hard actual bids into the auction to protect themselves from overbidding for an impression. Given that, our parallel bidding solution also takes into account of the networks’ historical deviation from their actual yield overtime and use this analysis to adjust their bids for the auction. That way, publishers are ensured that the winner bid in the parallel bidding auction is indeed the highest yielding ad bid, without being undercut by soft bids. 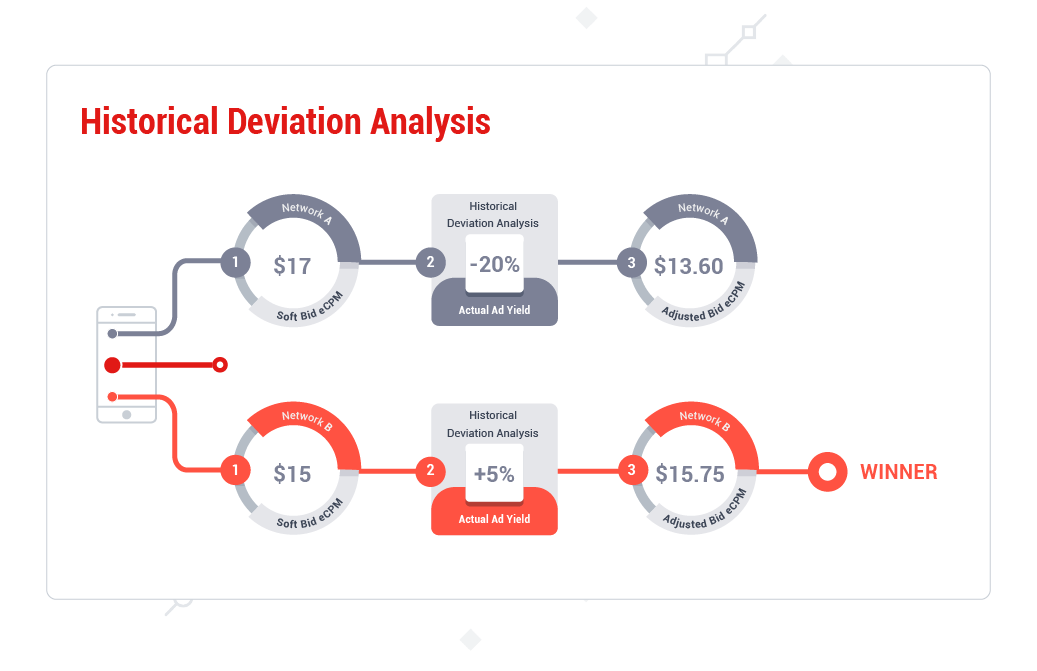 However, it turns out that through the historical deviation analysis, Network A’s actual ad yield tends to be 20% lower than their soft bids. Network B’s, on the other hand, tend to be 5% higher. Taking that into account, the adjusted bid for Network A becomes $13.60 and for Network B, $15.75. In this scenario, Network B would actually win the impression even though its soft bid was lower because what the publisher actually earns would be higher with Network B.

In a world where all ad networks have adopted parallel bidding, they should all be able to compete in real-time where the highest earning ad prevails. Alas, we are still probably two years until that becomes a reality. Although, many major ad networks are in the process of adopting this new technology.

Are publishers not entitled to these ads anymore?

The short answer is no.

In fact, what Appodeal does is take the best of both parallel bidding and the waterfall models to create a hybrid model that ensures that publishers end up with the highest paying ad regardless of whether the ad networks have adopted parallel bidding or not. As you may have read from part one of this article, we have overcome the obstacles of the waterfall model and reinvented it to one that is 100% unbiased and puts publisher’s ad revenue first.

Combining The Best of Parallel Bidding and Waterfall Models

In our hybrid model, we basically run a quick check concurrently to see if higher earning ads are available outside of the parallel bidding auction. 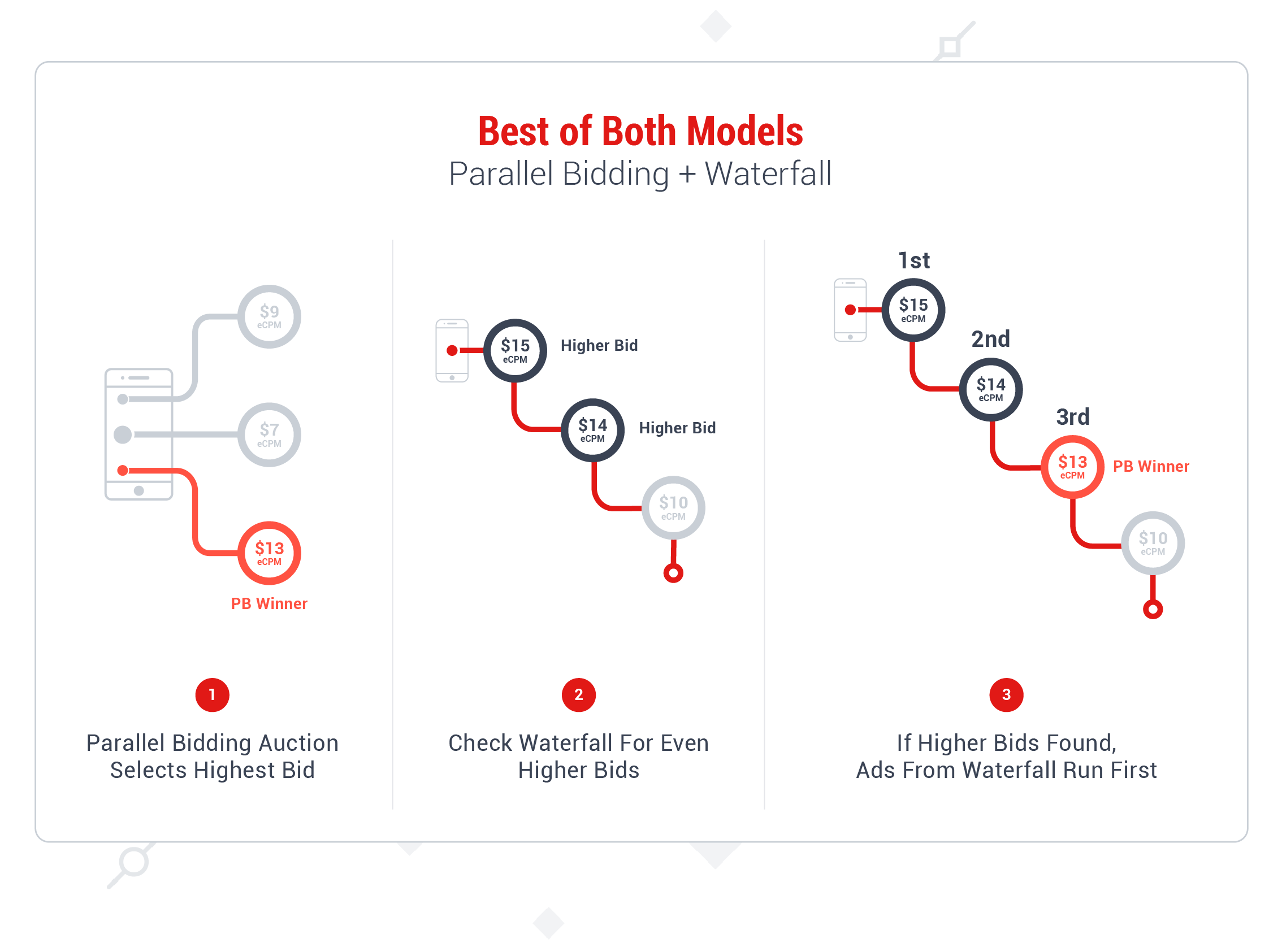 For example, when an app opens and requests for an ad, the request goes out through Appodeal’s server simultaneously to the parallel bidding ad networks and determines a winner of that auction. Let’s say Network PB wins that auction with an eCPM of $13. Our ad mediator does a quick check with ad networks within the waterfall model to see if there are any ads with eCPMs higher or not.

If none are higher, Network PB’s ad runs immediately. However, if there are ads with higher eCPMs of $15 and $14, for example, then these ads from the waterfall run first instead. Network PB’s ad will then assume a position behind these higher ad units in the waterfall and will be served after them.

Our hybrid model solution makes it possible for publishers to continue earning the highest ad revenue regardless of which model the winning ad comes from during this transitional period as the industry moves from the waterfall model to parallel bidding. Some other in-app header solutions on the market though make publishers pick between the parallel bidding model or the waterfall model.

But what about latency caused by this hybrid model? With just parallel bidding, since the ad request takes place simultaneously on the server-side, latency has been reduced significantly, by up to 70% in some cases if the winning ad is through parallel bidding.

In the case of fetching a higher earning ad through the waterfall, the latency would still be lower or equal than one would find through using just the waterfall model. The hybrid model would just add one ad unit to the waterfall, the parallel bidding winner, which in most cases would have an eCPM that’s already high, placing it towards the front of the waterfall. That means that the added latency caused by cascading down the waterfall until an ad fills is not likely to be noticeable.

What’s Next for Parallel Bidding

In addition to integrating more ad networks, our team has an exciting roadmap that includes:

As we commit to investing in this groundbreaking technology, we are confident that parallel bidding will completely takeover the waterfall model in the mobile ad space within the next two years. Both publishers and advertisers will ultimately win thanks to parallel bidding’s benefits of higher and more accurate ad bids, increased transparency and reduced ad latency.

Not monetizing with Appodeal yet? It's never too late to start by signing up today.

There are a lot of lists on the internet. Specifically, a lot of lists for how-tos, resources, tool comparisons - and the game dev community is no exception. It’s easy to get overwhelmed as a newbie, and we wanted to make sure that new game devs know that there’s plenty of help to be had […]

The trick is to make your ads as appealing as possible to users while keeping your app’s UX front and center.

How Video Advertising Affects Payments & LTV: An Experiment by Webgames

Advertising can be a compelling solution for supplementary monetization. If your game already features in-app purchases, you can keep the balance by building ads in carefully. For a better idea of how to do so, let’s check out this experiment performed by Webgames and Appodeal