Now That In-App Header Bidding Is Finally Here, Is The Waterfall Era Truly Over? (Part 1)

For years, mobile in-app advertising had lagged behind its desktop and mobile web counterparts with “header bidding” technology (we prefer to call it “parallel bidding” as headers do not exist in mobile apps and will use this term in this article). Until recently, in-app ads functioned primarily under a waterfall model, despite its numerous flaws as there was no other option.

In theory, parallel bidding would replace waterfalls by sending out ad requests simultaneously to ad networks that would then be empowered to bid on an ad impression in real-time programmatically, ensuring that publishers monetize with the highest paying ads as well as reduced ad delivery latency.

Truth be told, this parallel bidding technology is still in its early stage and will likely take a year or two for it to mature (but early results are encouraging). Many ad networks are simply not ready technologically to move completely from the waterfall model to participate in this new model (though many are in the process).

That is why some ad mediators, like Appodeal, are utilizing a hybrid model of both parallel bidding and the waterfall during this transitional period. Otherwise, using only the parallel bidding model would mean that high-earning ads from many ad networks that have yet to support parallel bidding would not be able to compete for an ad impression, which ultimately limits publishers’ full-earning potentials.

That is why, in the interest of publishers, the waterfall model is far from being gone forever. In fact, understanding the differences of how ad mediators developed (or did not) their waterfall technology is still an important half of the equation for publishers to monetize successfully today and beyond.

In part one of this article, we will dive deeper into how Appodeal’s ad mediation technology innovated on the traditional waterfall model to generate the highest ad revenue for publishers.

Then in part two, we will explore how Appodeal’s enhanced waterfall model works seamlessly with our new parallel bidding technology to develop even better results for publishers.

In the Beginning There Was The Traditional (and Flawed) Waterfall 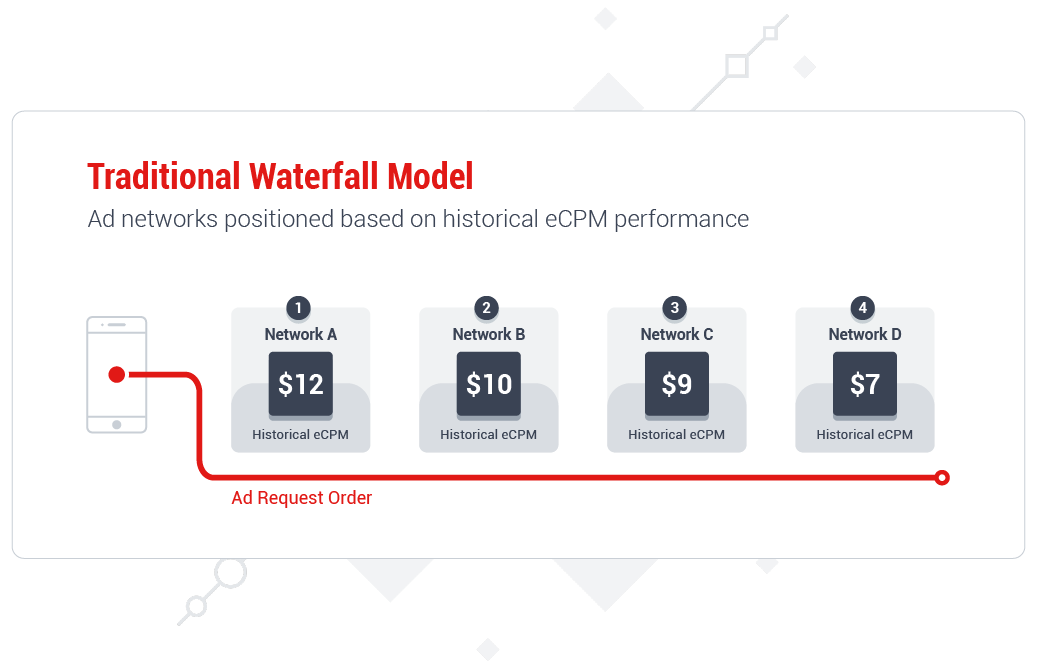 For these ad mediators/ad networks, handling the two conflicting interests in their ad mediation is a tricky balancing act. Until recently, the traditional waterfall model served as their status quo solution but it was not designed to please either party.

Definition
Traditional waterfall: an ad bidding model where the ad request cascades down from one ad network to the next in sequential order until one is able to fill the request

In general, ad mediators that are also ad networks keep their own ad networks higher in the waterfall positioning so their own demands get served. Appodeal’s ad mediation, on the other hand, is categorically different as it is not connected to an ad network and does not have its own ad demands. It was specifically created just for publishers from the ground up.

Without needing to be concerned about advertisers’ desire to pay less for an impression, we were able to build an ad mediation platform that’s 100% unbiased by innovating on the waterfall model with a unique focus on publishers’ interest in earning the most revenue per impression.

First, we had to overcome the obstacles for publishers with the traditional waterfall model, and there were four main ones: 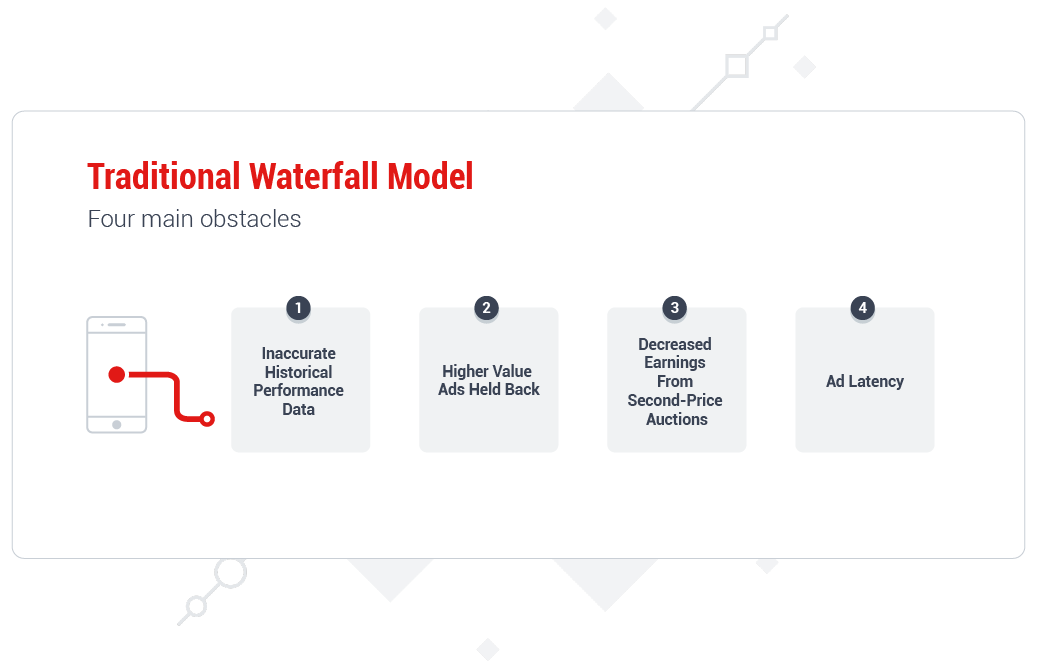 The first problem we overcome in our ad mediation solution was the issue of inaccurate historical performance data. In a traditional waterfall, the ad networks’ positioning is formed based on their historical eCPM performance.

But what if Network B has a new ad campaign worth $15 eCPM? Its waterfall positioning would still be behind Network A’s due to the inherent setback of forming a waterfall solely on the historical performance.

Currently, our ad mediation pulls API reports from our partner networks up to 10 times a day to make sure we can adjust the waterfall positions based on their most recent eCPM values, along with their historical fill-rates.

In short, relying on just the networks’ historical performance to set up a waterfall leads to suboptimal ad revenue outcomes for publishers.

To overcome this problem, we’ve evolved our ad mediation to form waterfall positionings based on not just historical performance but also with price floors.

Definition
Price floors: the minimum bid an ad placement is willing to consider for an ad to be served.

This addition of price floor ad units allowed ad networks to place ad bids based on the value of the ad itself to get into the waterfall, and not just based on the network’s historical performance. For example, if an ad unit within a waterfall has a price floor of $13, an ad network can submit an ad bid of $14 to win this ad impression.

By introducing price floors into the waterfall, we’ve essentially flattened the waterfall cascading from the ad network level down more specifically to the ad bid level. This solution ensures that the highest earning ads are served first since they are no longer trapped behind an ad network’s uncompetitive waterfall positioning. 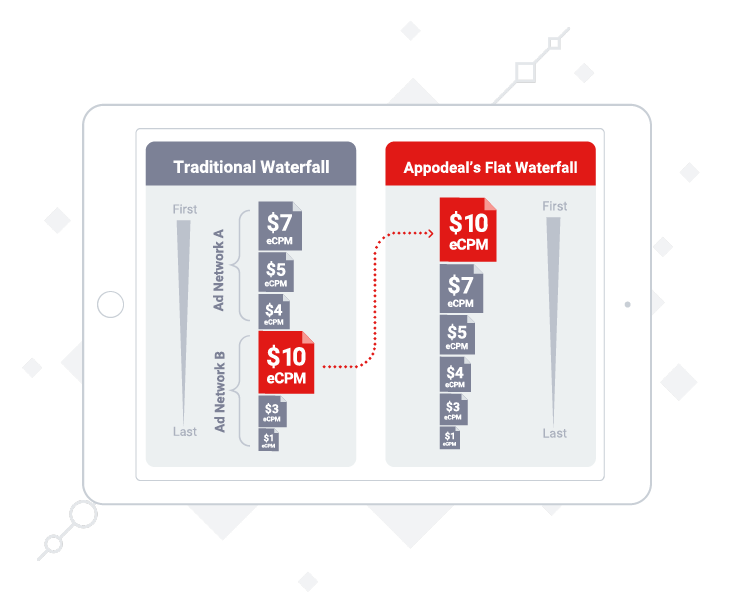 Another benefit of price floor for publishers is that it gives publishers more power to assign value to certain ad units and also gives ad networks more transparency in deciding whether to place a bid or not.

For example, if a publisher sets a price floor of $15 eCPM only for its first-fill ad unit for iOS users in San Francisco and an ad network happens to also have an ad campaign that can meet that price-floor targeting users based in San Francisco, the ad unit would be filled at $15 eCPM.

This example demonstrates how publishers can protect the minimum value of their ad impressions in an auction environment by filtering out ads of poor quality or low eCPM.

Soft bids allow more ad networks to compete for an ad impression, which ultimately elevates publishers’ earnings. However, to ensure that ad networks don’t simply bait and switch by submitting inflated soft bids to win an impression and end up paying less, our ad mediation analyzes for a week the actual average price of the network’s soft bid. After this period, the soft bid get readjusted to their more accurate price and are placed in the waterfall at this new price.

When an advertiser places a winning bid of $10 eCPM, the publisher should in fairness earn that $10 eCPM, right? But unfortunately, that is not true due to the prevalence of the second-price auction model, which basically diminishes publishers’ true earning to that of the second-highest bid. If the second-highest bid is $7 eCPM in this scenario above, the publisher would earn just a penny over $7 eCPM and not $10 eCPM, even though the higher one’s ad was served. That’s a difference of $3 not being paid out to publishers.

This second-price auction model is another classic example of a status quo solution that exists to satisfy more the interests of advertisers in paying less for an ad impression rather than publishers’.

While this model is not going away anytime soon in the mobile world, our insertion of price floors into the waterfall has the added benefit of helping publishers earn much closer to the winning top bid. 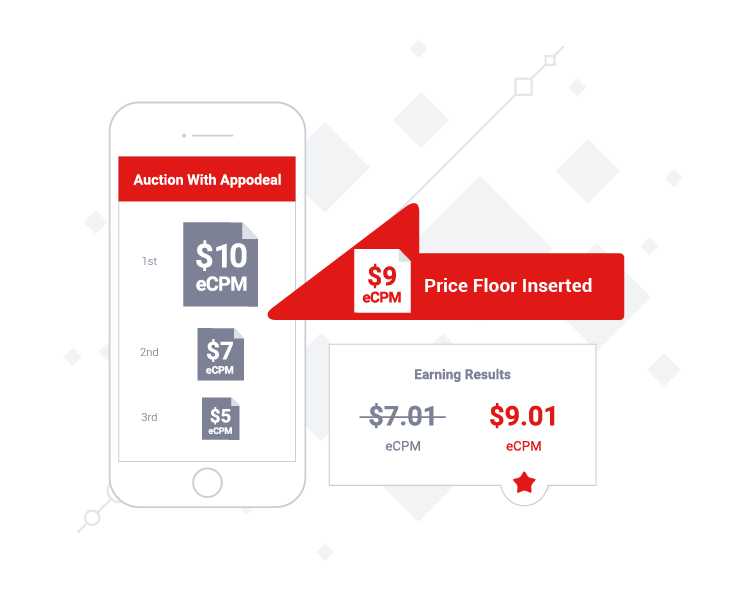 Even though technically the mechanism used here is still within the second-price auction framework, the end result is more akin to one in between the first-price and second-price auctions and, ultimately, more fairness in earning potential for publishers.

Lastly, the issue of latency remains for both requesting an ad and delivering a winning ad.

The issue of ad delivery latency is one mainly for loading video ads, which also happens to be the highest earning ones. If a user reaches a video ad placement within an app but the video ad doesn’t load quickly, the user might get impatient and close the app. The ad request doesn’t get filled and, on top of the poor user experience, no ad revenue gets earned.

To combat this issue, our ad mediator pre-caches the video ads in advance so that users won’t encounter slow ad load time.

The latency issue related to requesting an ad, on the other hand, is one that is emblematic with the waterfall model by design. Since an ad request goes from one demand source to another sequentially until it gets filled, the more requests required before it gets filled means the longer the latency.

Because parallel bidding sends out ad requests to the demand sources simultaneously as well as on the server-side, this issue of ad request latency associated with the waterfall model is reduced significantly, by up to 70% in some cases. 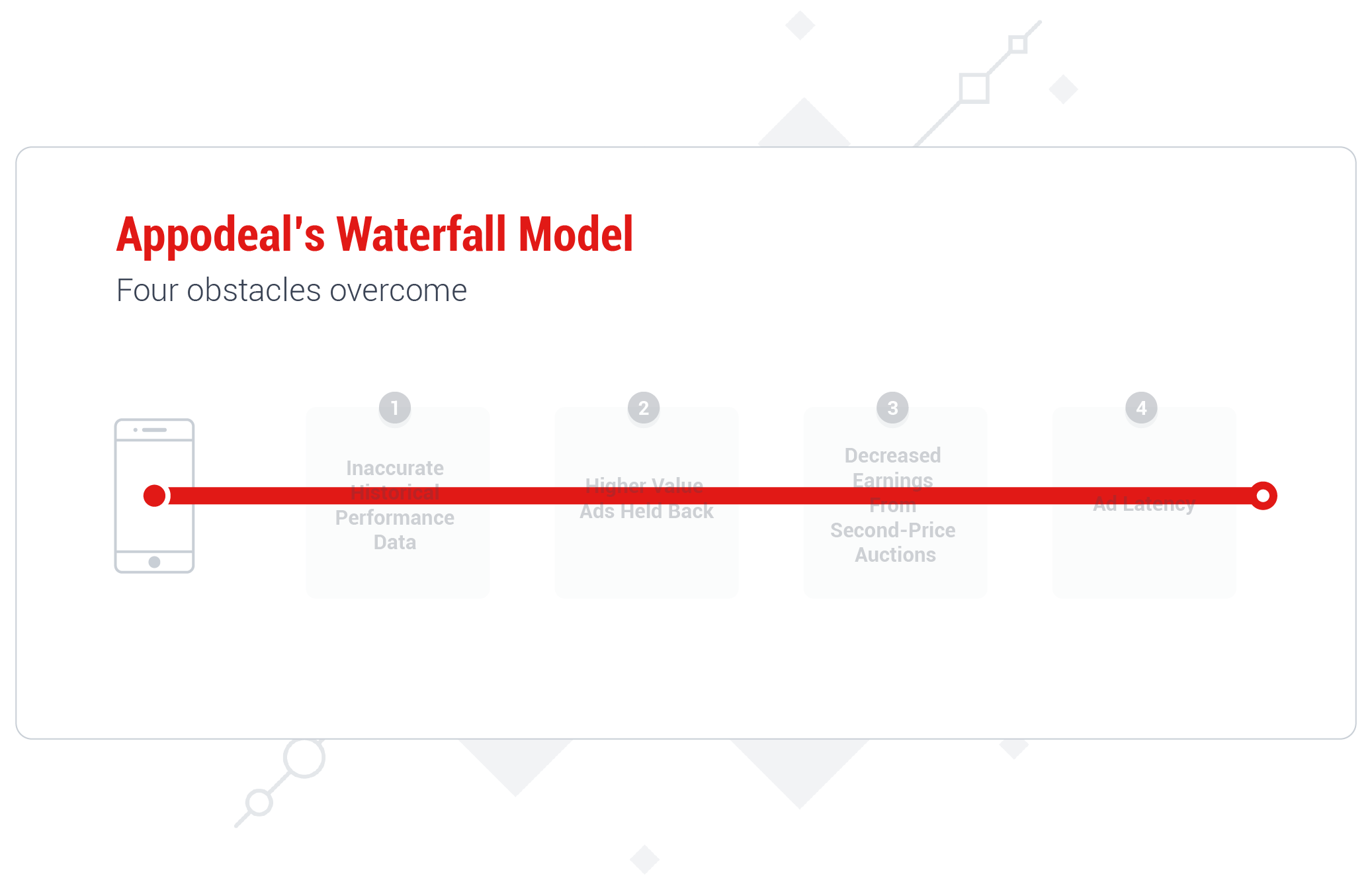 Now that parallel bidding is finally available and integrated with four ad networks starting with SDK 2.4.5, publishers can now monetize with the benefits of reduced latency and higher ad revenue from more competition among ad demand sources. By the time SDK 2.5.0 is released later this year, we expect to more than double the number of parallel bidding powered ad networks.

Be sure to check out part two of this article to learn how Appodeal is combining the best of both models, parallel bidding and the waterfall, to elevate even more ad revenue for publishers.

New Feature: Demand Control Center
While our powerful ad mediation platform made it possible for publishers to monetize efficiently without needing to manage it manually, there may be instances where publishers could benefit from more manual control of the waterfall. 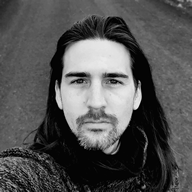 It's a common perception that ad revenue tends to decrease typically once the new year start. But is that always true? Find out what you can do to start 2020 right for higher ad revenue.

Austin, TX (June 23, 2022) – Appodeal announced today that it has joined forces with Adjust, the mobile marketing analytics platform, to deliver a growth experience to all mobile app and game creators. With this partnership, all Appodeal users now have access to their user acquisition (UA) and attribution data from a single dashboard. By […]

What’s Next in Mobile Monetization? Our Industry Predictions for 2017

2017 is poised to be a transformative year for mobile developers and publishers. No longer is it necessary to integrate ad networks individually and hope for the best. Publishers are finding themselves on a more even playing field as mobile rises as the champion of digital media usage.