How to Test Appodeal

Ideally, you should test Appodeal across apps with the same amount of traffic, to get an accurate picture. It’s even better to test Appodeal on 50% of the audience of one app, in case you want to compare us to your current ad tool. If you’ve been monetizing with an ad network which is also included in the Appodeal SDK, it makes sense to activate this network in Appodeal in order to avoid conflicting errors.

The majority of networks use CPM, CPC or CPI methods. CPM-based networks usually pay per 1000s of guaranteed impressions so it’s good to have at least 10,000 impressions within your app to have a mediation service performing the way it should. Appodeal collaborates with developers who have smaller amounts of traffic, though such a drastic change of revenue shouldn’t be expected in those cases.

Consider geolocation, demographics and other aspects of your target audience while testing Appodeal. In the example below, it’s inaccurate to compare the Russian and American apps’ rates because the latter will appear to be higher. 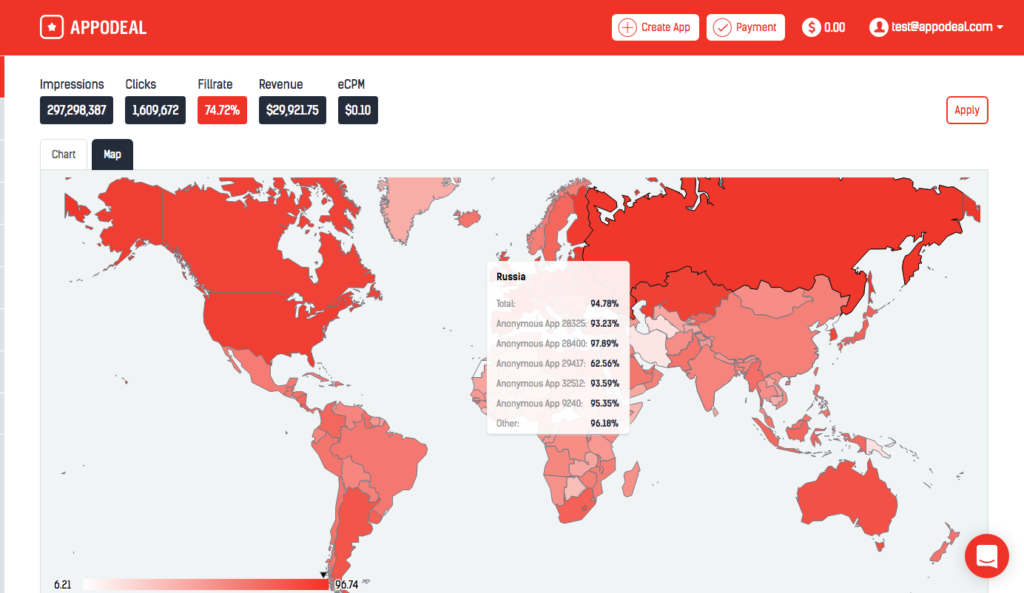 Ad networks usually set their budgets at the beginning of each quarter and are more active at the end of the quarter. There’s no point in comparing boundary months like December and January because December’s rates will appear higher much higher than the average across the rest of the year.

Liberate yourself while comparing revenue rates and don’t focus on eCPM alone. eCPM is undoubtedly important, but it’s a relative value which can be easily affected by any amount of impressions. There’s another rate that demonstrates the percentage of ads served based on the total number of page impressions: fill rate. Fill rate is directly connected to the user flow rule. A lack of users can be easily determined from fill rate – there’s nobody watching the ads, so the rate decreases. Even a high eCPM doesn’t guarantee constant and decent revenue. Your app should work properly without any bugs so the users can watch ads.

There’s one more important rate that can help you follow daily changes and compare ad networks. You can count it yourself: ARPDAU = Daily Revenue / Daily Active Users. This rate is quite unbiased so you can apply it to ad networks of various levels, no matter if they bring 1000 or 10,000 impressions. It’s crucial to compute this rate using a breakdown of one country rather than mixing the rates of different countries because there are different fill rates and revenue streams across countries. Low revenue rates can blur the overall picture so the comparison could be incorrect.

This rate is even more illustrative than ARPDAU in the context of user engagement.

In order to get relevant results, LTV should be also compared within the same country.

These are a few of the best ways to test Appodeal’s performance, and the most useful metrics to compare with results from other services. If you have any questions about any of these rules or numbers, let us know how we can help!

What do you look for in a mediation tool which helps you determine if it’s the one for you?

When you log in to your Appodeal dashboard, you will now experience Appodeal 2.0 all-in-one Growth Engine with the release of one of Appodeal’s most major product launches: Appodeal’s Growth Intelligence.

If you want to tweak and improve the Ad Creatives & Video Ads of your User Acquisition Campaigns for your Mobile Games, then, keep reading!